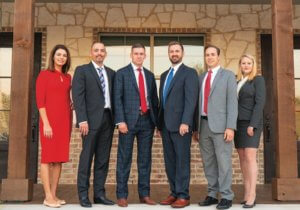 Dallas Fort Worth International Airport is one of the busiest airports in the world. With so many people coming and going through DFW Airport, the DFW Airport Police Department remains very busy. From intoxication offenses, to unlawfully carrying a gun in a secured area, the DFW Airport authorities make many arrests each week.

Unlawfully Carrying a Weapon at the Airport – Felony Charges

It is a criminal offense to carry a handgun (or other prohibited weapon) into the secured area of an airport. In many cases, this is a true accident, in that a person is unaware that they had a gun in their carry on luggage when they place it in the x-ray to be scanned. Accident or not, DFW Airport Police will typically arrest a person who brings a gun to the checkpoint and charge them with a felony offense.

Under Texas Penal Code Section 46.03, “a person commits an offense if the person intentionally, knowingly, or recklessly, possesses or goes with a firearm into a secured area of an airport.” An offense under 46.03 is a 3rd Degree Felony, which carries a punishment range of 2-10 years in prison and a fine up to $10,000.

In 2015, Texas amended Section 46.03 of the Penal Code to allow for License To Carry (LTC) holders to take their gun back to their car if the accidentally bring it into the secured area of the airport. This exception has lost some of its effectiveness when Texas became an Open Carry state, but it is a big reason why we still advise people to go ahead and get their LTC because accidents happen and you would rather be in a position to take the gun back to your vehicle, than to be arrested.

Can I Get My Gun Back if it was Seized?

If your firearm was seized as part of your arrest, our attorneys can help you get it back once the matter has been resolved. The law requires that the gun be released to the owner if the case is dismissed (absent some other agreement). Our attorneys retrieve more firearms from the DFW Airport than any other law firm. In fact, the evidence custodians know us by name. Once the case is disposed, we will make a motion to the trial judge to order that the weapon be released to our custody. These motions are typically granted even if they are opposed. Of course, the facts of every case are different, so we can’t make any blanket promises, but in past cases, we have been very successful in getting our client’s gun returned to him or her.

Like gun charges, drug offenses usually stem from a traveler having drugs in their carry-on luggage that is noticed by TSA when their bag is scanned. Drug offenses can include illicit drugs as well as prescription drug that are not stored in a proper container. To learn more about drug offenses in Texas, please read our Drug Crimes Page.

Typically, a person that is arrested by DFW Airport Police will have to wait to be transferred the following day to the Tarrant County Jail where a Magistrate Judge will arraign him and set a bond so that he can be released upon posting bond. There is a process, however, in which a person can be released straight from the DFW Airport Jail. If the arrestee or his representative contacts an attorney in a timely manner, the attorney might be able to pursue a Writ Bond to have the person released from the Airport Jail. Depending on the time of day and weekday/weekend, a Writ Bond can be accomplished in a matter of hours. Our attorneys file dozens of Writ Bonds for folks arrested by DFW Airport each year. If you want to pursue a Writ Bond, you should contact us immediately for a free case evaluation.

Our attorneys have a tremendous amount of experience handling charges arising from DFW Airport. Call 817-993-9249 or send an email to learn how we can help you fight DFW Airport criminal charges. Brandon Barnett | Criminal Defense, Weapons Charges | No Comments
Unlawful Carrying of a Weapon at an Airport in Texas We love our guns in Texas. After all, those licensed to carry a handgun can now choose to conceal the… Luke Williams | Weapons Charges | No Comments
How Do Toy Guns or Fake Guns Fit Into the Criminal Justice System? In the wake of the recent rise in gun violence, Apple made a big announcement last week… Luke Williams | Weapons Charges | No Comments
There are many consequences for persons arrested and charged with a crime in Texas.  One of the often overlooked considerations is whether and to what extent a criminal accusation impacts one's authorization… Brandon Barnett | Weapons Charges | No Comments
5th Circuit Holds that Prosecutors need not provide evidence for each one of the Ceballos-Torres ‘Felon in Possession in Furtherance of a Crime’ factors. US v Walker (5th Circuit 2016) At…
DWI Attorney

Our Christian attorneys understand that good people can sometimes find themselves in bad situations having been arrested or in a terrible accident. Let us be a blessing to you in your time of need.

Consider it pure joy, my brothers and sisters, whenever you face trials of many kinds, because you know that the testing of your faith produces perseverance. Let perseverance finish its work so that you may be mature and complete, not lacking anything.