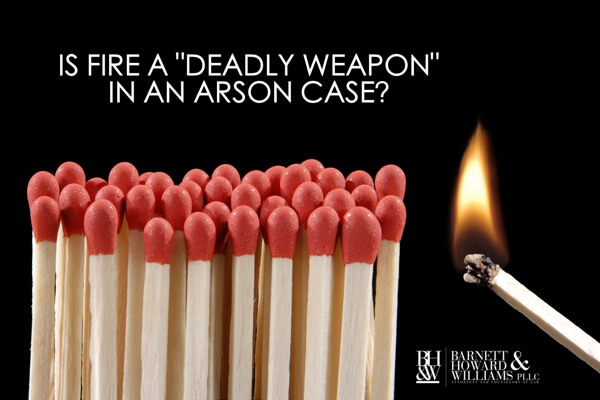 Is Fire a Deadly Weapon in an Arson Case?

Defendant’s Arson Charge was Enhanced when Fire was Alleged as a “Deadly Weapon.”

***UPDATE – This case was REVERSED by the Texas Court of Criminal Appeals in 2017. See opinion here. Jeffery Pruett inherited a one-third shared interest in the family home with his two siblings after the death of their elderly parents. The adult siblings had a long history of quarreling over Pruett’s living arrangements, as he moved in and out of the residence prior to the deaths of their parents. Fed up, Pruett moved into a motor home, and was often seen by the neighbors driving around the neighborhood. Meanwhile, Pruett’s siblings listed the home for sale with the intention of dividing the proceeds equally between the three siblings.

On December 19, 2012, a neighbor spotted Pruett parking his motor home in front of the residence. Pruett exited the vehicle, went into the backyard of the residence, and then got back into the vehicle and drove away. Moments later, the neighbor saw smoke coming from the back of the house. The neighbor ran to the backyard, saw flames shooting out of the residence, and called the Fort Worth fire department. Neighbors were successful in using a garden hose to extinguish a large portion of the fire. When the fire department arrived, they confirmed that there was no one inside the home and put out the remaining flames. After an investigation, the arson investigator concluded that the fire had been intentionally started with a flammable ignition source.

At trial, the fire department’s battalion chief testified that had the flames not been put out, the fire would have consumed the home. Further, the arson investigator testified that the fire was “very dangerous,” putting neighbors, fire fighters, and anyone inside the home in immediate danger of death or serious injury. Considering his use of fire to be a deadly weapon, the trial court convicted Pruett of arson, sentencing him to twenty years imprisonment. Pruett appealed to the Second Court of Appeals, arguing that the court lacked sufficient evidence to support the finding of fire as a deadly weapon. Fire as a deadly weapon carries a heavier penalty in Texas.

What does Texas Law say about fire as deadly weapon?

Fire is not considered a deadly weapon in the Texas Penal Code, however, a Court can find that fire was used as a deadly weapon if the surrounding circumstances meet a three-pronged test. Mims v. State, 335 S.W. 3d 247, 249-50. In order for fire to be deemed a deadly weapon, the evidence must prove

The Second Court of Appeals Weighs In – The Court must determine whether the fire set by Pruett was capable of causing death or serious bodily injury.

Did the fire meet the statutory definition of a deadly weapon?

Here, the Court says the neighbor had put out most of the fire with the garden hose by the time the fire department arrived on the scene. Further, the neighbor who called the fire department was not placed in danger. Even though the arson investigator testified that the firefighters were placed in danger, such danger is part of the job. Since there was no one else in the home at the time of the fire, there is no evidence that the firefighters were put in actual danger of death or seriously bodily injury. The Court concludes, “the facts—viewed…in light of what did happen [not what could have happened]—do not support [fire as a deadly weapon] in this case.” The Second Court of Appeals orders the deadly weapons finding to be deleted from Pruett’s judgment.

In reversing the Court of Appeals, the CCA held:

“An arsonist is not the same as an intoxicated driver, and the degree of danger and harm that each offender is capable of causing is materially different. In the case at bar, the deadly nature of the fire is not difficult to appreciate. Fire is inherently dangerous in a way that cars are not and it is capable of inflicting serious bodily harm, especially when it is intentionally started in a residential neighborhood. This fire was dangerous because it was left unattended and because appellant used an accelerant. As a result, the fire endangered not only the lives of the firefighters who responded to the call but also the lives of neighbors who could have been killed or seriously injured if the fire continued to spread. The fire also posed a danger from both the heat effects and the emissions of toxic chemicals. In this case, the State adequately demonstrated that the fire that appellant started was capable of causing death or serious bodily injury…When evidence at trial demonstrates that someone ignites combustible material to intentionally burn down a house in a residential neighborhood, a deadly-weapon finding may appropriately attach to the arson conviction when the fire is capable of causing death or serious bodily injury. That is what happened in this case. “ The “deadly weapon finding” under Texas criminal law is an issue that leads most criminal defense lawyers to bang their collective heads against the courthouse wall. It seems that just about anything and everything is, has been, or will soon be, designated as a “deadly weapon” when the prosecution deems it helpful to securing a conviction and lengthier sentence. Here are some deadly weapons that we’ve seen recently: car, fist, baseball bat, walking stick, STDs, fire, fake gun, etc.

In the case below, the Texas Court of Criminal Appeals finally ratcheted back the power of the State to enhance a case with a deadly weapon finding.  Kudos to the 1st Court of Appeals (Houston) for stepping out on this issue.

In Plummer v. State, the Houston Court of Appeals, First Judicial District, held that there “must be some facilitation purpose between the weapon and the associated offense to support a deadly-weapon finding.”