The Evils of Technology | GPS Search

I love technology – from tablet computers to smartphones to flat-screen televisions.  If it’s shiny and new and guaranteed to make me the envy of my friends and family, I’ll buy it (to the dismay of my wife).  One of the recent (in the last 5 years) technological advancements that has made its way into just about every home in America is GPS.  Whether it be a Garmin running watch, a TomTom navigational device, or a GPS location broadcaster on your cell phone, most people use some sort of GPS device every day.  Aside from the fact that we’ve lost the capability to drive somewhere without turn-by-turn directions, GPS is great.

Jose Juan Hernandez, however, might not agree that GPS is so great.  In a recent 5th Circuit Court of Appeals Case (United States v. Hernandez), Hernandez challenged the GPS search that the DEA had surreptitiously (and without a warrant) performed on his brother’s truck to track its movements.  Hernandez was arrested while driving his brother’s truck to California on a drug run.  The police seized 20 pounds of meth from the truck.  At trial, Hernandez moved to suppress the drugs, arguing that the discovery was the result of an unlawful search (as a result of the GPS tracking).  The trial court denied the request.

The 5th Circuit held that Hernandez had standing to challenge the use of the GPS search device placed on his brother’s vehicle by FBI agents because he drove the vehicle with consent, but he lacked standing to challenge its placement because the vehicle was not registered to him.  The Court also held that the DEA agents’ use of the surreptitious GPS search device to track Hernandez was not a search within the meaning of the Fourth Amendment, explaining that it was more akin to the old beepers that police used to place on vehicles in the 80’s and 90’s.  Accordingly, the Court upheld the trial court’s denial of the motion to suppress. The Court did not decide whether a GPS search device that continuously and precisely monitors location would constitute a search. 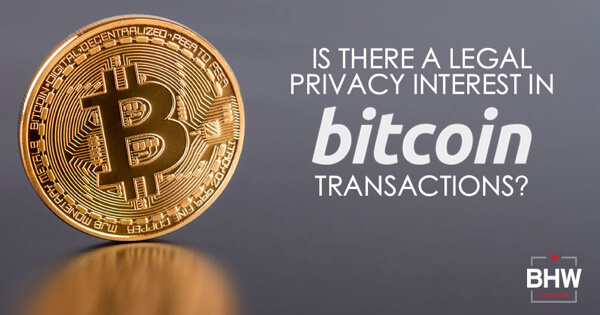 Are Bitcoin Transactions Private Under the Law?