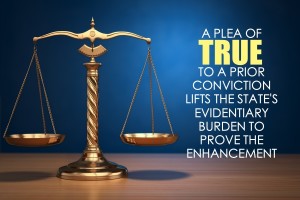 What happens when the State omits the year of an offense on a legal document presented before the court for a sentencing enhancement? Well, nothing, so long as the defendant pleads “true” to the priors and the enhancement itself is not improper, according to the latest holding from the Court of Criminal Appeals. The CCA revisits Roberson v. State to explain why it comes to this quirky conclusion.

Defendant Pleads “True” to a Notice Pleading with Incomplete Information

Essie Hopkins was convicted for aggravated robbery for shooting his victim as he ran away with her wallet. During the punishment phase, the State pushed for an enhancement to his sentencing for more prison time under Texas’s habitual offender statute. In the original indictment, the State alleged that the defendant had a prior conviction for aggravated assault with a deadly weapon from 2003. Later, the State alleged in a notice pleading that the defendant had a second aggravated assault conviction, however, the State failed to include the year of the offense in the paperwork. When the State read the enhancement allegations into court record, Hopkins pled “true” to committing and being charged with the prior felonies. Hopkins’ mother also testified, citing knowledge of the two prior felony convictions—one occurring in 2003 and the other in 2009. The State did not provide evidence of the prior aggravated assaults.

On appeal, the Fifth Court of Appeals affirmed the lower court’s conviction, holding, “that [Hopkins’] plea of “true” to both enhancements was sufficient evidence to support a finding on those allegations.” Hopkins v. State, No. 05-14-00146-CR, 015 WL 3413582, *6 (Tex. App.—Dallas May 28, 2015, pet. granted) (mem. op.) (not published). Hopkins appealed to the Criminal Court of Appeals, arguing that because the wording in the notice pleading is not clear, the State was required to present evidence of the felony even though Hopkins pled “true.”

The Court of Criminal Appeals Looks to Roberson v. State

In Roberson, the defendant was convicted of aggravated assault with a deadly weapon and was sentenced to 30 years in prison based on a “true” pleading to prior felony convictions. Id. Because the court record of that case did not affirmatively reflect that the enhancement was improper, the court held that the defendant’s “true” pleading relieved the State’s burden of proving up the felony convictions. Id. at 840. In Roberson, the court record also supported the enhancement allegations. Id.

The CCA stated, “[Hopkins] fail[s] to direct us to any record evidence affirmatively showing that the enhancements were improper, the record actually supports the enhancement allegations.” In sum, if a defendant pleads “true” to a sentencing enhancement during the punishment phase at trial, then the State is absolutely relieved of the evidentiary burden to prove the defendant actually committed and was convicted of the priors, so long as the enhancement itself is not improper.