The Stowers Doctrine | Good Faith in the Settlement of Claims

What is the Stowers Doctrine and How Does it Apply to a Personal Injury Case in Texas? 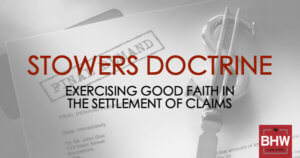 History of the Stowers Doctrine

The Stowers Doctrine originated in 1929 from the Texas Supreme Court case G.A. Stowers Furniture Co. v. American Indemnity, Co., 15 S.W.2d 544 (Tex.). Stowers Furniture Co. had an auto insurance policy with American Indemnity for $5,000. During the policy term, a furniture employee’s truck was involved in an accident and suit was brought by the injured passenger, claiming $20,000 in damages. While the suit was pending, the injured party served Stowers with a letter offering to settle for $4,000—within policy limits. The letter gave a deadline to accept the offer and provided proof of the excessive damages. American Indemnity refused to settle and went to trial with the intention of saving money. They lost at trial and a jury awarded the injured party more than twice the amount of the policy. The terms of the insurance policy stated that Stowers was responsible for a judgment in excess of the policy limits. Stowers paid the judgement and then sued the insurance company for reimbursement.

How Does a Stowers Demand Work?

The Stowers Doctrine is a tool unique to Texas law and has created a new type of settlement demand: the Stowers demand. This demand is a time-sensitive letter sent to a third-party insurance carrier with an offer to settle within the insured’s policy limits.8 For a Stowers demand to be valid, five requirements must be met:

If these requirements are met and the insurer fails to accept the offer by the deadline, the defendant’s insurance company may be held responsible for verdict in excess of its insured’s policy limits.10 Accidents on Icy Texas Roads: Who is Liable? What if I Didn’t Get a Police Report for My Car Wreck?